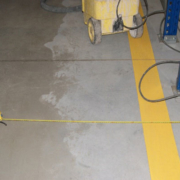 As the flooring is used, the damage to the top layer of the finish is revealed which is not only the result of being made incorrectly, but is also the result of the missing specification of some parameters at the design stage.

The Most Common Damage

As far as surface hardened industrial floorings are concerned, it is worth to know what errors occur most often at the construction stage.

There are many reasons for scratches and cracks in the flooring. Defects of this type make its aesthetics deteriorated and are directly related to its functionality and durability. Most often, scratches occur due to concrete shrinkage stresses in the early phase of paving the flooring. This is often because it is inadequately cared for, too shallow dilatation cuts were made at the wrong time or no cuts were made at all. In addition, there are soil settlements phenomena under the flooring or the supporting structure of the flooring is excessively loaded.

Grid Of Micro-Cracks And Micro-Scratches [Photo 3]

Most commonly, micro scratches are caused by excessive flooring drying, too much dry-shake or other technological factors acting during the flooring trowelling and hardening.

Most commonly, chips of this type occur because aggregate in the concrete mixture formula were improperly selected or because dry-shake aggregate were low quality in relation to the prevailing climatic conditions. These defects are strictly related to the lack of resistance of aggregate grains to transfer the volume changes caused by unstable physical conditions, such as freezing-thawing or alternate dampening and drying. This type of Damage is quite often found in multi-level garage parking lots (e.g. in shopping centres), which have canopies, but because of moving cars and washing are permanently moistened.

The damage is the result of the harmful reactions of active silica obtained from the aggregate with alkali contained in the cement. Most commonly, alkali-reactive aggregate are grains of porous limestones, gaizes (containing amorphous silica), flints, chalcedony, hornstones, tridymite, cherts and lidites. The reactions of reactive silica with cement alkali start with the aggression of hydroxides obtained from the alkalis of cement to the silica minerals of the aggregate. An alkaline-silica gel, which is a compound capable of absorbing large amounts of water, is then created, thus increasing its volume. The swelling product obtained causes internal pressure. As a result, cracks are created; the surrounding hydrated cement grout breaks and is destroyed. These processes only occur with water. The minimum relative humidity inside the concrete that lets these reactions happen is approx. 85% at 20°C. The tests have shown that the alkali – silica reaction is the fastest in the temperature range of 10-36°C. The intensity of this type of reaction depends to a large extent on the size of the grains and their porosity. If cement is the only source of alkali, then their concentration will depend on the size of the reactive surface of the aggregate grain. Flooring destruction is manifested as craters of up to 3 cm deep, in the form of so-called pop-outs. However, the occurrence of reactive alkali aggregates in concrete causes large surface damage and has a much greater impact on the reduction of the surface durability. The only way to stop the alkali – silica reaction is to dry the concrete and cut it off from the impact of moisture.

Chipping Away Grains of the Dry-Shake

The pattern of the chip formation in the flooring is related to the projecting part of the grains above the surface of the flooring and its loosening under the influence of friction of the usable motion [traffic, pedestrians]. Grains, which are moved in cycles, loose and chip from the flooring. This mechanism is a result of grains being not properly fixed in, in most of the cases, the fine aggregate.

The increased amount of steel fibres released from the dispersed reinforcement from the flooring slab can have many causes. One of the main reasons is the excessive trowelling. A frequent reason for defects is also the phenomenon of so-called bleeding [releasing water onto the surface of the concrete) while making the construction panel, making it difficult to shape and trowel the flooring. Increased amount of water in the near-surface layer of the flooring makes the concrete structure locally weakened, reducing its surface strength and durability through its excessive abrasion as it is used.

Heavy frost corrosion or frost corrosion caused by the presence of de-icing salts on the entire surface of the flooring is most often found in floorings exposed to direct atmospheric factors, i.e. located outdoor, in unprotected areas. This is usually caused by failing to adjust the concrete parameters to the prevailing environmental conditions and the making the construction board of concrete that is not resistant to frost in the presence of de-icing salts.

Damage to the Surface due to Acidic Corrosion [Photo 9)

In food production industrial plants, the phenomena of acid corrosion resulting mainly from decomposition of calcium carbonate by acids and leaching erosion as a result of the impact of washing devices can often be found. Mineral surfaces, unlike resin ones, are absorbent. When exposed to chemicals, they do not fully protect against aggressive chemical environment.

Making industrial floorings in extreme weather conditions often causes many problems with the surface layer scaling. This phenomenon is called horizontal delamination. This is usually resulting from trowelling that may have been begun too late or too early. In addition, water that may have been released as a result of excessive air temperature, too much air flow and insufficient care may affect the scaling. Flooring scaling may reach even 2 cm deep into the surface layer.

In large-area logistics warehouses, industrial plants or motor vehicle diagnostic stations, since they are heavily used or heavily loaded, the hardening material may be excessively scaled where the vehicles pass. Damage may be the result of wrong selection of the hardening dry-shake with insufficient durability parameters in the prevailing conditions. They are often the result of the wrong care or too small amount of the dry-shake rubbed in.

Industrial floorings with surfaces hardened by the so-called dry-shake are the most popular method of making the finishing layer used nowadays in service and industrial construction industry. At the design stage, physicochemical parameters are often not specified as far as the requirements for floorings are concerned. Most commonly, the designers describe only the strength parameters of concrete in terms of structural layer load. In the design recommendations, often no requirements for the top layer of the flooring are specified or their description is vague. These deficiencies in the designs are the result of failing to properly match the floorings to the real environmental and operational conditions.

Industrial floorings with surfaces hardened by the so-called dry-shake are the most popular method of making the finishing layer used nowadays in service and industrial construction industry. At the design stage, physicochemical parameters are often not specified as far as the requirements for floorings are concerned. Most commonly, the designers describe only the strength parameters of concrete in terms of structural layer load. In the design recommendations, often no requirements for the top layer of the flooring are specified or their description is vague. These deficiencies in the designs are the result of failing to properly match the floorings to the real environmental and operational conditions.

WMS system – improved flexibility and measurable benefits for the war...
Scroll to top

We may request cookies to be set on your device. We use cookies to let us know when you visit our websites, how you interact with us, to enrich your user experience, and to customize your relationship with our website.

Click on the different category headings to find out more. You can also change some of your preferences. Note that blocking some types of cookies may impact your experience on our websites and the services we are able to offer.

These cookies are strictly necessary to provide you with services available through our website and to use some of its features.

Because these cookies are strictly necessary to deliver the website, refusing them will have impact how our site functions. You always can block or delete cookies by changing your browser settings and force blocking all cookies on this website. But this will always prompt you to accept/refuse cookies when revisiting our site.

We fully respect if you want to refuse cookies but to avoid asking you again and again kindly allow us to store a cookie for that. You are free to opt out any time or opt in for other cookies to get a better experience. If you refuse cookies we will remove all set cookies in our domain.

We provide you with a list of stored cookies on your computer in our domain so you can check what we stored. Due to security reasons we are not able to show or modify cookies from other domains. You can check these in your browser security settings.

We also use different external services like Google Webfonts, Google Maps, and external Video providers. Since these providers may collect personal data like your IP address we allow you to block them here. Please be aware that this might heavily reduce the functionality and appearance of our site. Changes will take effect once you reload the page.