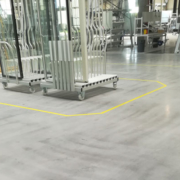 I. Types of Floorings

The definition of the flooring is specified in PN- -EN 13318 Standard [1], which introduces definitions for floor screeds. According to the standard, the flooring is the top, usable floor layer. It should be understood as the surface of the structural system on which pedestrian traffic and the movement of vehicles takes place, on which the devices are placed and materials are stored. The construction layer of the floor and the foundation system are responsible for the possibility of transferring the live loads and providing adequate thermal, acoustic or anti-water insulation, while the task of the top layer of the entire structural system is to provide appropriate performance and durability characteristics. At the design stage it should be remembered that it is primarily the flooring that makes the entire system durable, protects the lower layers of the system against aggressive environmental factors and makes the entire system safe to use. The industrial floors can be basically divided according to the existing loads. According to the classification adopted by the ACi [2] Committee, four classes of loads have been defined from the light loads [for wheel loads up to 10 kN] to very heavy loads (for wheel loads above 80 kN).

However, as far as the finishing layer of the floor is concerned, other criteria of the division than the requirements of the load-bearing capacity of the structure itself should be adopted. While designing, such parameters as: usage environmental conditions (room humidity, temperature, temperature amplitude, frost factors), abrasion resistance (transit frequency, type of traveling vehicles, washing frequency, type of washing machines or cleaning products), resistance to chemical aggression (type of cleaning agents, type of products used on the flooring or stored on it) should also be taken into account. This is a large group of parameters that the future flooring user should define as design guidelines.

Taking into account the factors mentioned above, the designer selects the technology for making the flooring. Based on the technology and the type of material, industrial floors can be divided into: surface hardened concrete flooring (DST – dry shake topping); resin flooring: polypropylene, polyurethane; thin‐layer, self‐spread decorative flooring; finished with ceramic cladding or roughly plastered. 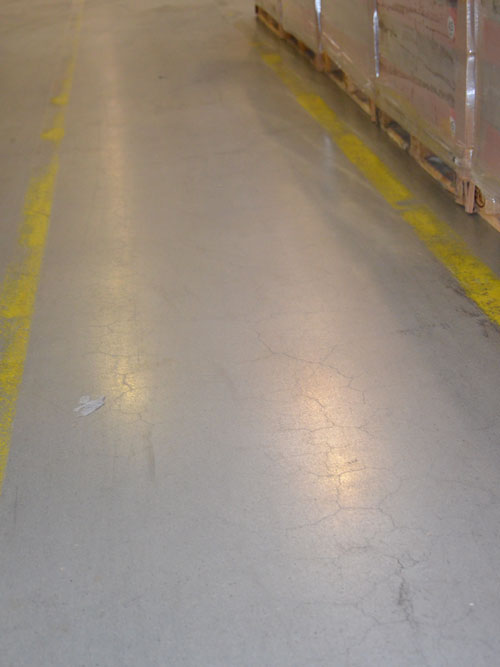 For economic reasons (in theory, the smallest performance requirements), in industrial and service facilities in Poland, surface hardened floorings, the so-called DST, using dry shake topping method are the most commonly made. If the technology is properly used, this is a technology that allows to achieve high abrasion resistance, dusting and increased hardness. However, if the appropriate technological regime is not observed and when the floor is made in unfavourable weather conditions, numerous damages occur even in the first year of use of the flooring.

According to the generally accepted principles of designing concrete mixes for floorings, cement mass must not exceed 350 kg/m3, and the w/c ratio must not exceed 0.5. The sufficient content of the aggregate fraction below 0.2 mm is particularly important. The content of this fraction should not be less than 4%. At the same time, the content of dust [cement + aggregate less than 0.125 mm] should be limited to 400 kg/m3, and the content of cement + aggregate fraction lower than 0.25 mm should be limited to 500 kg/m3. In the case of dry-shakes, manufacturers very often apply additional criteria to concrete mixes. The basic one is the requirement for concrete mixtures not to contain fly ashes, as they tend to gather in the upper layer of the panel, which can increase flooring’s dusting and can result in loosenings. The use of appropriate cement – mainly low alkaline [NA) is also an important criterion. The most often recommended cements for flooring concrete with a hardening layer are: CEM I, CEM ll/A-S, CEM ll/B-S, CEM lll/A. 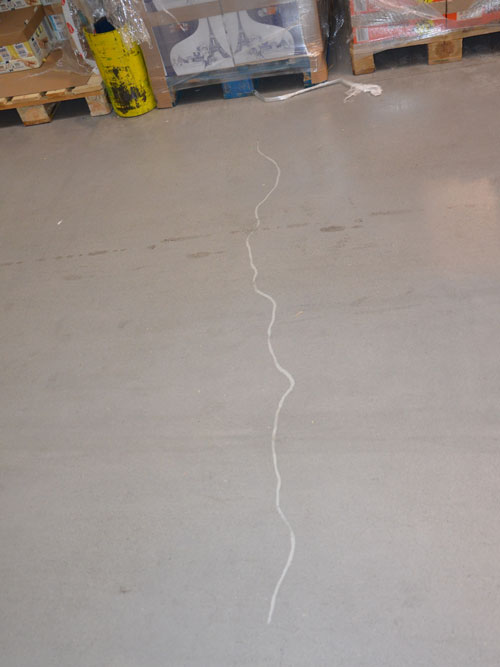 As far as the hardening layer is concerned, it is recommended [3] for concrete surface to be wet. Any excess water should be removed. The surface should be refreshed with a trowelling machine’s disc, and then, about half of the provided amount of dry-shake material (2-2.5 kg/m23) should be spread out and pre-trowelled with a disc. Only later the second batch of material (2-2.5 kg / m2) should be scattered and trowelled with a disc again. At the stage of spreading, the material consumption should be controlled so that it is evenly and adequately spread (usually 4-5 kg/m2) on the surface.

According to the PN-EN 206 Standard (41 concrete mixes should be designed taking into account the environmental impact. In order to do so, exposure classes have been defined giving a description of aggressive environments for concrete and reinforced concrete structures. The division was made Based on corrosive factors such as: carbonation, non-seawater and seawater chloride corrosion, aggressive impact of freezing and thawing without de-icing or with de-icing agents, and chemical aggression. The latest edition of the PN-EN 20B (41 Standard of 2014 does not define exposure classes for aggression caused by abrasion. 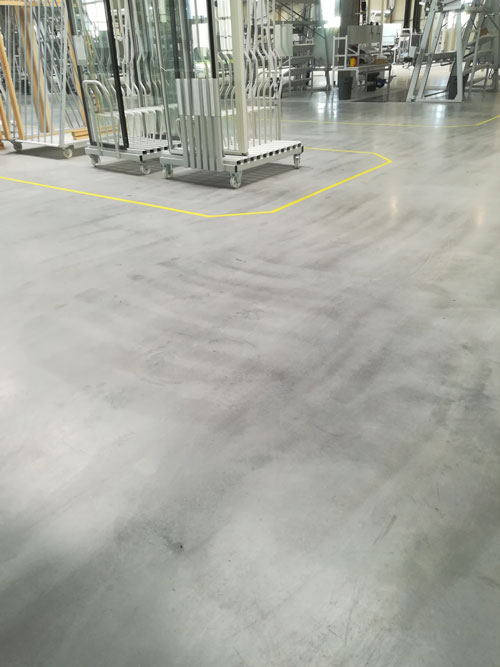 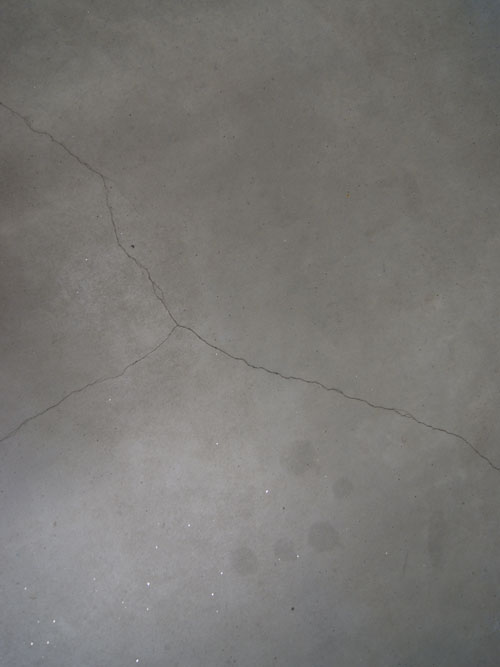 In construction projects, concrete specifications with classes adequate for environmental exposure are given by designers very rarely. Therefore, by default, if no class is given, the contractor assumes the class described as X0, which corresponds to no threat by environmental aggression or corrosion hazard.

We may request cookies to be set on your device. We use cookies to let us know when you visit our websites, how you interact with us, to enrich your user experience, and to customize your relationship with our website.

Click on the different category headings to find out more. You can also change some of your preferences. Note that blocking some types of cookies may impact your experience on our websites and the services we are able to offer.

These cookies are strictly necessary to provide you with services available through our website and to use some of its features.

Because these cookies are strictly necessary to deliver the website, refusing them will have impact how our site functions. You always can block or delete cookies by changing your browser settings and force blocking all cookies on this website. But this will always prompt you to accept/refuse cookies when revisiting our site.

We fully respect if you want to refuse cookies but to avoid asking you again and again kindly allow us to store a cookie for that. You are free to opt out any time or opt in for other cookies to get a better experience. If you refuse cookies we will remove all set cookies in our domain.

We provide you with a list of stored cookies on your computer in our domain so you can check what we stored. Due to security reasons we are not able to show or modify cookies from other domains. You can check these in your browser security settings.

We also use different external services like Google Webfonts, Google Maps, and external Video providers. Since these providers may collect personal data like your IP address we allow you to block them here. Please be aware that this might heavily reduce the functionality and appearance of our site. Changes will take effect once you reload the page.